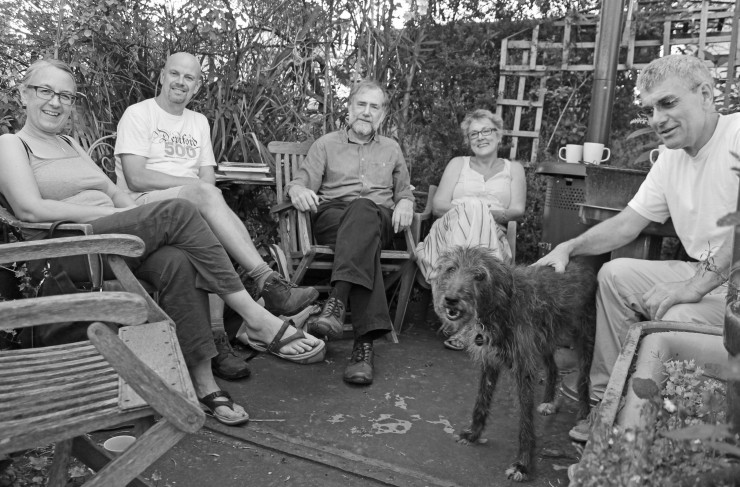 The Lenox Project was established as a community interest company in January 2012, bringing together a small group of local Deptford residents who were concerned about plans to redevelop the former Royal Dockyard. David Graham joined us in 2013 after finding out about the project during Open House at the Master Shipwright’s House.

We all have long-term Deptford links either as residents or through our professional connections, and we have a huge network of contacts in Deptford and the local area through our involvement in other community groups and organisations.

In January 2017 we completed the process of converting from a community interest company to a charity.

Ian is a retired local government officer and NHS manager with extensive experience in health and social care, including redevelopment projects.

Julian has been repairing and building boats for more than 35 years and has been resident in Deptford since 1988, and has since founded his company Creek Boats. He has built and restored traditional cargo narrowboats, refitted the French schooner Natanael, built residential barges up to 33 metres and been involved with the restoration of the Massey-Shaw, London’s oldest fire-boat. He is also involved in the renovation of HMS Warrior in Portsmouth. During his varied career he has also been transport and locations manager on international film sets across Europe and in Russia, worked in antique furniture restoration, and managed a shoemaking factory.

Helena is a freelance writer and technical editor with more than 25 years’ experience of business-to-business publishing in the international civil engineering sector. She has extensive experience of print and online publishing, and has authored and project-managed publication of books for clients in the UK, USA and Scandinavia.

David qualified as an architect in 1974 and has 40 years’ experience of working with London based practices in various sectors, including affordable housing for local authorities and housing associations, health care, schools and public buildings, including both new and refurbishment projects and listed building restoration. He has also been involved in several regeneration projects in Deptford.

David was born and grew up in Deptford, and is founder and director of Rediscovered Urban Rituals, an ongoing platform for experimental performance. He has performed on the national and international stage since the late 1970s both working solo and in collaboration with artists such as Cholmondeley Dance Theatre, Featherstonehaughs, William Burroughs and Julian Cope. He has extensive experience in art direction and production on music videos, commercials, festivals, TV and film productions.

Richard Endsor is a British naval historian and maritime artist whose 2009 publication Restoration Warship: the design, construction and career of a third rate of Charles II’s navy is a comprehensive history of the Lenox. Endsor’s professional career spans 30 years as production engineer and computer programmer for international engineering firms, but his lifelong enthusiasm for all things maritime led him to devote many years to researching the ships and shipbuilding techniques of the 17th century. He has also forged a successful career in naval illustration, and Restoration Warship is lavishly illustrated by Endsor’s own drawings and paintings. www.richardendsor.co.uk

Genevieve St George is the London and south east secretary of The Nelson Society. Born in New Zealand, she has a lifelong passion for maritime history and Captain Cook in particular, and has, like Cook, circumnavigated the world. As a Greenwich resident and retired history teacher, she is an Angel for the Old Royal Naval College, a member of Royal Museums Greenwich, has assisted the Ahoy Centre in Deptford, and recently organised the planting of the Hardy Oak, a memorial to Admiral Hardy at the Greenwich world heritage site.

Jacqueline Stanford is a business consultant with more than 30 years’ business consultancy and management experience in the legal profession. She joined the Shipwreck Museum Hastings in 2008 as business director and has made huge changes which have improved the look, income and visitor figures at the museum. She founded the Friends of the Mary Stanford Lifeboat House, which secured Grade II listing for the boat house in Rye Harbour Nature Reserve, and took over its ownership. She is also the licensee of the Anne, sister ship of the Lenox and the last of the original 30 Restoration Warships of Charles II. The Anne was lost at the Battle of Beachy Head in 1690 and now lies on the shore at Pett Level in East Sussex. Jacqueline is a qualified diver, a parish councillor for Rye Harbour and a member of the Harbour of Rye Advisory Committee.

Adrienne Copithorne is an environmental and public law practitioner. She joined Richard Buxton Environmental & Public Law in 2008 and was made a partner in 2014. She became a solicitor-advocate in 2011 and was named an ‘associate to watch’ by Chambers & Partners Legal Guide 2014 and an ‘up and coming’ environmental claimant lawyer in the 2016 guide. Adrienne represents residents’ groups, parish councils and individuals in planning and environmental judicial reviews, planning inquiries, statutory nuisance (including successfully defending recipients of abatement notices) and private nuisance. She has also acted for clients defending prosecutions by the Environment Agency and for farmers whose land has been wrongly designated Nitrate Vulnerable Zones.

Andrew Peters is an experienced wood carver who specialises in high-quality decorative work for maritime environments such as ships figureheads, nameboards and yacht interiors. He founded Maritima in 1990 in an effort to keep the art of the ship’s carver alive, and his recent commissions include researching, designing and carving stem decorations, quarter galleries and figurehead for the Götheborg replica ship in Sweden, and the design and carving of a lion figurehead for the replica ship L’Hermione, which was built in Rochefort, France. www.maritimawoodcarving.co.uk

Peter Goodwin is widely recognised as an authority on wooden warship construction. He worked as keeper and curator of HMS Victory in Portsmouth for two decades following a 25-year career as a marine engineer for the Royal Navy. He acted as historian and technical advisor to the Royal Navy for the restoration, conservation and interpretation of this iconic historic ship. His work included researching and designing replica items such as gun carriages for interpretation requirements, and advising on the ship’s rigging. As well as being a published author, Goodwin has acted as consultant for the restoration of the British frigate Trincomalee and the Portuguese frigate Don Fernando et Gloria II, and as advisor for numerous film and TV productions including Master & Commander (20th Century Fox) and Persuasion (BBC).

David Davies is a bestselling and multiple prize-winning author and historian, writing as JD Davies. He is a vice-president of the Society for Nautical Research, a former chairman of the Naval Dockyards Society, and a Fellow of both the Royal Historical Society and the Society for Nautical Research. He won the Anderson prize for the best maritime history book of 2017 for Kings of the Sea: Charles II, James II and the Royal Navy (which also won a Certificate of Merit for the Mountbatten Prize), and the Samuel Pepys prize for 2009 for Pepys’s Navy: Ships, Men and Warfare, 1649-89. He was shortlisted for the Mountbatten Maritime Literary Award in 2014 for Britannia’s Dragon: A Naval History of Wales. He is also the author of the bestselling ‘journals of Matthew Quinton’, a highly acclaimed series of naval historical fiction set in the Restoration period, beginning with Gentleman Captain, with eight titles published to date; The Times has described it as ‘a series of real panache’. He is currently working on a new trilogy of Tudor naval novels for Canelo Publishing. His website is at https://jddavies.com

Joan was the Labour Member of Parliament for Lewisham Deptford from 1987 to 2015. She held posts in Government and Opposition as Minister for State at the Department for Energy and Climate Change (DECC) in 2008; Minister in the Department for Environment, Food and Rural Affairs (DEFRA) in 2007. Minister for Women (1997-1998), Shadow Minister for Home Affairs (1992-1994) and Shadow Transport Minister (1989-1992). From 1998 she has sat on a wide range of select committees, in addition to holding a number of positions on Parliamentary groups and introducing bills to Parliament. She is currently a Vice-President of the Socialist Environment and Resources Association (SERA). In 2010 Joan was appointed as a Privy Councillor and received a DBE in recognition of her public and political service. Joan has supported The Lenox Project since its inception. www.joanruddock.org

Dan studied at Balliol College, Oxford, where he graduated in 2002 with a first-class honours degree in Modern History. He is best known for his career as a broadcaster, presenting a wide range of history programmes for the BBC, including The Birth of Empire: The East India Company in 2014.