The concerns that have been raised by local campaign group Deptford Is.. about the future of the former Royal Dockyard and the remains of Sayes Court Gardens were echoed this week when the World Monuments Fund placed the two sites on its 2014 ‘watch list’ of endangered sites. 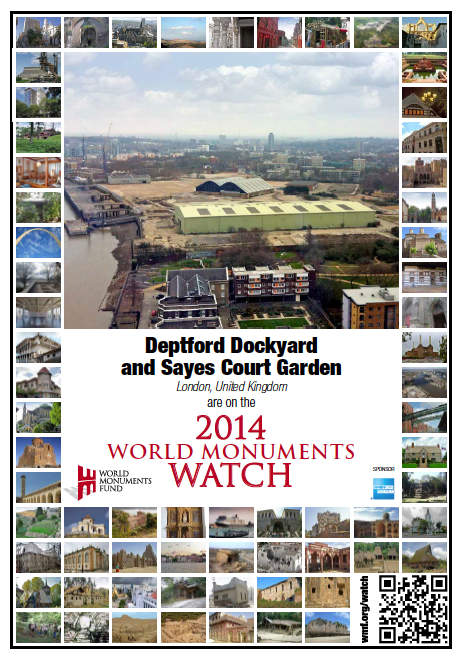 Both sites are under threat from Hong Kong-based developer, Hutchison Whampoa, current owner of the majority of the land. HW has submitted plans for 3,500 new homes that will bury the landscape, which is of international historic significance, largely without trace. WMF Watch list status supports the Deptford Is.. campaign to build on rather than build over the rich history of the area.

“Deptford’s most imminent threat comes from the failure of existing proposals to fully acknowledge and respect the heritage assets that the site has to offer,” said Jonathan Foyle, chief executive of World Monuments Fund (WMF) Britain.

“Incorporating the extensive archaeology and combining this with unique public spaces has the potential to strengthen Deptford’s local identity while securing this lost piece of the Thames jigsaw. It would also improve awareness of the little-known existence and overlooked history of the dockyard and gardens on a national stage.”

This announcement underlines what Deptford Is.. and other local campaign groups have been saying for years – that the historical significance of the Convoys Wharf site is of the same status internationally as world-famous places such as the city of Venice and the Inca ruins. The burial of such remains would be a severe blow not only for the local area, but also from a national and international heritage point of view.

The WMF watch list announcement was covered extensively by the press around the world, with some UK coverage highlighting the plight of the dockyard specifically.

Read the WMF project page, where you can download the poster.

Article in This is local London