The deadline for signing the Convoys Wharf Section 106 agreement has been extended for a fifth time, with a new date of 9 January being set.

Since planning permission is not deemed to be granted until this agreement is signed, this also delays the start of the Lenox Project feasibility study. In their application, the GLA planners said that the extra time was required to continue discussions over the review mechanism for the amount of affordable housing that the redevelopment will provide, and to allow comments on the draft agreement from the two community groups – The Lenox Project CIC and Sayes Court Garden CIC – to be considered.

We welcome this statement and trust that we will see our extensive comments reflected in the wording of the final agreement. We have expanded our previous comments in response to the latest documents, but many of the fundamental issues that we raised before have not been addressed. As a result we are not confident that we will see any real change.

The last time we met with the GLA, Lewisham Council and Hutchison Whampoa to discuss the terms of the agreement that relate to the Lenox Project was in August. At the time we gave detailed feedback on those clauses that were of concern to us, on the understanding that it would be taken into account.

It was not until 14 November that we were issued with a copy of the draft planning condition and a revised draft of the section 106 agreement, and we were given a week to submit comments – very short notice for a community group in which most volunteers work full time. We did manage to meet the deadline, and hope the new target completion date will provide time for our comments to be properly considered.

Unfortunately past experience suggests that further changes may not be forthcoming and we will be left with conditions that render the project infeasible.

The conditions currently being proposed are no better than those on offer before outline planning permission was granted on 31 March 2014. Despite eight months of negotiations between the GLA, Lewisham Council, developer and the Lenox Project team, there has been no appreciable progress towards a set of conditions that would support the wider aims of the project or its long term viability.

• Mayor pledges support for The Lenox Project, but only after a site has been selected.

The Mayor has expressed his support for The Lenox Project, subject to the most feasible site being selected. But neither of the sites on offer would be feasible on the terms proposed in the draft Section 106 agreement, so we are left with a classic ‘Catch 22’ scenario.

• No offer of promised long term educational, training, research and employment opportunities for Deptford or a permanent museum and berth for the Lenox.

Fundamentally, the lease terms on the sites that are being offered do not recognise the long-term aims of the project, and could even prevent us from applying to the Heritage Lottery Fund.

As previously reported, the Mayor has expressly excluded the double dry dock from the study, even though it could be the most feasible. The lease terms offered for the Olympia Building at market rates or the Safeguarded Wharf at a peppercorn rent only last for 10 years. But the project is not just about building the Lenox; we want to ensure a long term legacy for the Royal Dockyard by providing educational, training, research and employment opportunities, a permanent museum and berth for the Lenox, coupled with ongoing historic ship building and restoration.

• Section 106 community project clauses contain conditions which only offer short term occupancy of a site for up to 10 years.

There are no provisions which promote a permanent location for the project. All the terms rely on renewal of a short term lease under conditions biased towards the owner. The Heritage Lottery Fund, in particular, will not usually support a project with a lease of less than 15 years. The lease terms pre-empt the outcome of the proposed feasibility study and contradict the original planning condition made by the Mayor. The conditions also work against the need to get the project started as soon as possible; the only locations on offer are in the second and third phases of the development. 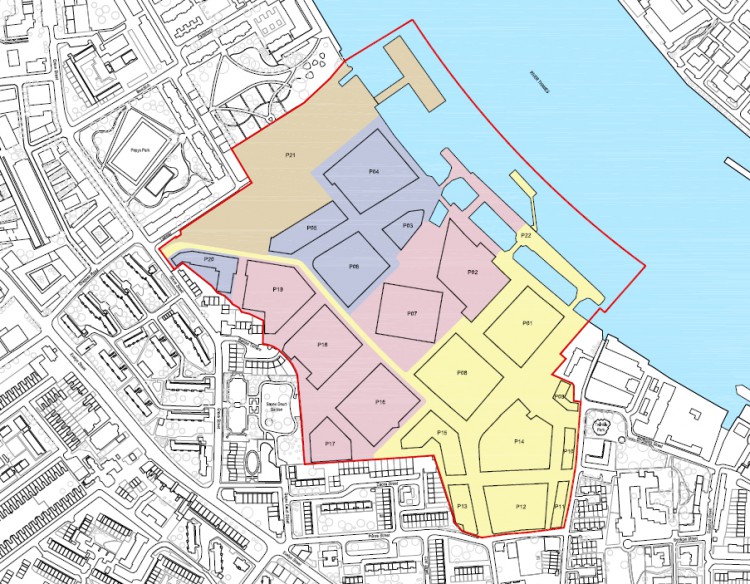 Phasing of the project: phase one shown in yellow, phase two in pink and phase three in blue. The developer proposes to include the Safeguarded Wharf (brown) in phase two.

The current wording of the documents rules out early occupancy of the Olympia Building. What’s more, we have only been offered half of the building, which provides sufficient space to build the ship, but not enough to realise the wider project aims, and no provision for launching the ship or a home berth.

The constraints currently in place on the Safeguarded Wharf mean that we would not be able to occupy it without approval from the Secretary of State, something which is not guaranteed. Hence the project could be delayed indefinitely if the Safeguarded Wharf were selected as the most feasible site, pending this approval. There are also competing planning interests which need to be resolved before it can be considered as a viable location for the project. The restriction on uses for this site expressly excludes the processing of timber –  a procedure that is fundamental to construction of a seventeenth century sailing ship.

The planning conditions do not require the developer to accommodate the Lenox Project on the Convoys Wharf redevelopment site, so the success or failure of the project relies on the wording of the Section 106 agreement. Whichever site is chosen, access could be restricted by the developer; either by delaying the information submitted to discharge planning conditions or delaying provision of the infrastructure needed to start the project.

The odds of achieving a successful outcome to the feasibility study under the current terms are stacked against us. We will continue to lobby the Mayor to intervene by asking his officers to amend the Section 106 conditions to support the project and its wider aims for the benefit of the local community and London as a whole. We make no secret of the fact that we aim to provide a centre of excellence with an international reputation. We just need others to take an equally imaginative approach.

If you share our concerns, please write to the Mayor at: boris.johnson@london.gov.uk.