This Saturday 21st and Sunday 22nd September we will be celebrating the 500th anniversary of Deptford Dockyard being granted its royal charter. As part of London Open House weekend, the historic Master Shipwrights House on Watergate Street, Deptford, will be open to the public free of charge. This is the house in which the master shipwright John Shish, who designed and built the Lenox, would have lived. 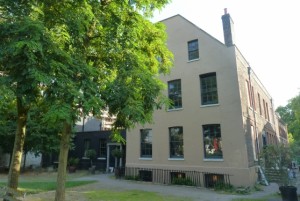 The house will be open from 10am till 4pm on Saturday and Sunday, and is situated at the end of Watergate Street, next to the Paynes & Borthwick development and across the road from Twinkle Park.

In addition to the opportunity to visit one of Deptford’s best-kept secrets, there will be plenty going on at the venue to entertain visitors. During the course of the weekend, the grounds and rooms of the house will host music, art, cannons, anchors and information about the Build the Lenox and Sayes Court Gardens projects.

On Saturday Build the Lenox has arranged for a ship’s cannon dating from 1630 to be fired at regular intervals throughout the day by a crew costumed in period dress – there will also be the chance to see the restored Saker cannon which also dates from the same era.

Actors Ben Willbond and Laurence Rickard from BBC’s Horrible Histories are coming along to support Build the Lenox, and you may be lucky enough to see them chatting to Henry VIII, Samuel Pepys and shipwright John Shish who will be discussing the 30 ships programme and the amazing history of Deptford’s royal dockyard.

Laura X Carle’s full-size cardboard replica of the Deptford anchor will be on show, for all those who didn’t see it at the South Bank Centre, with Sue Lawes‘ Old Blue & White in the grounds – as well as Hollie Paxton and her Deptford-inspired high street shop tins, and Ashton & Mollett’s Deptford Ship Biscuit.

Historians and authors Richard Endsor and David Davies will be giving impromptu talks throughout the day to bring the history of the Dockyard and her ships to life, and Richard will be displaying some of his wonderful paintings of the Lenox under construction at the Deptford Dockyard, as well as putting his model of the ship on show.

A model of Sayes Court Gardens will also be on show, with representatives from both this project and Build the Lenox on hand to answer any questions and find out what visitors think.

If you have a yearning to become a mudlark, take a tour along the foreshore via the historic Watergate; you will see the beautiful stone pavement leading to the former King’s Steps, the blocked-up entrance to the Double Dry Dock and other elements of the dockyard, and old ship’s timbers in the mud of the riverside. You can also see some of the fascinating things Chris has found during his regular trips along the low tide mark. 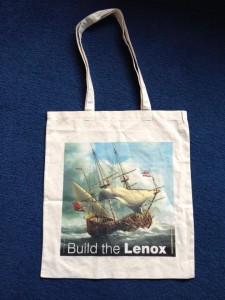 Visitors to Open House will be able to purchase t-shirts with the specially-designed Deptford 500 logo, as well as tote bags featuring the Lenox in a Storm painting by Richard Endsor. Both items are limited edition, and only available from the event, and all proceeds from sales will support the Lenox Project directly. 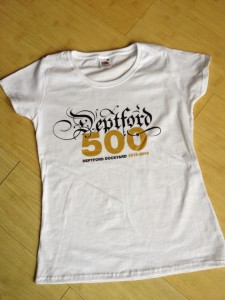 T-shirts are £15 each and we have men’s sizes M,L and XL, and ladies’ sizes S, M, L and XL. Tote bags are £8 each. They will be on sale throughout the Open House event at the Master Shipwright’s House.