Lenox was built at the Royal Naval Dockyard at Deptford, better known as the King’s Yard. Deptford was established as a centre for naval shipbuilding by the late 15th century: the accession of Henry VIII in 1509 marked a massive programme of naval expansion, and in 1513 Henry began the development of Deptford by building a great storehouse. By the 1540s, ‘the King’s Yard’ at Deptford had become by far the most important royal dockyard in the nation for the construction and repair of warships. Sir Francis Drake was knighted here in 1581, and his Golden Hind was stored here as a visitor attraction for more than 70 years. 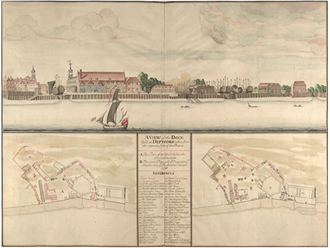 By the 17th century Deptford was the second major centre for shipbuilding after Chatham, established under Elizabeth I, gained pre-eminence in this respect; the navy board appointed a Master Shipwright in both yards. It was to Deptford that Tsar Peter the Great came for three months in 1698 to learn shipbuilding techniques, and its 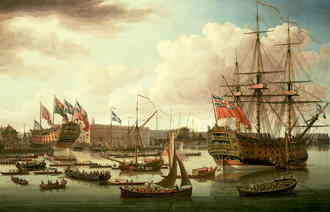 proxmity to the Navy Board Office in the City of London meant that it was frequently chosen for new or experimental construction.

However, the shifting of hostilities to France and Spain in the 18th century meant that Portsmouth and Plymouth gained pre-eminence. A number of well-known vessels were fitted out at Deptford, including Captain Cook’s Endeavour and Discovery, as well as ships used in Nelson’s campaigns.

Despite navigational difficulties caused by the silting up of the Thames, and the Yard’s consequent inability to service larger ships, further expansion took place in the 18th century when the dockyard reached an area of some 30 acres, but after 1815 it fell into decline.

It closed in 1869 and the site was acquired by the Corporation of London for use as London’s Foreign Cattle Market. The handsome late 17th-century officers’ terraces, which stood to south of the Master Shipwrights House and offices, were demolished in 1902. The dockyard suffered massive destruction in WWII, and was redeveloped as warehousing known as Convoys Wharf in the 1950s, when the remains of the bomb-damaged Tudor storehouse were demolished. 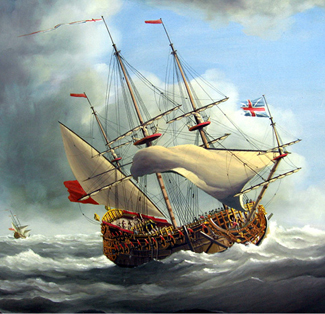 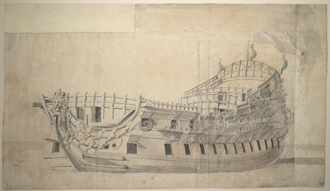 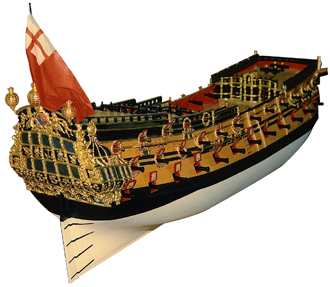 During the seventeenth century, Deptford was the King’s premier ship-building yard. The Master Shipwright who built Lenox was John Shish, succeeding his father, Old 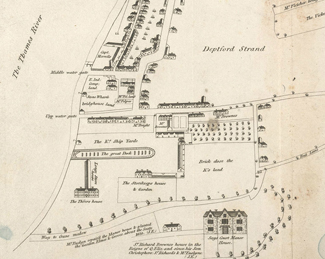 Jonas, and they are commemorated with other family members where they are buried in St Nicholas’s Church, Deptford.

Most of the population of the town was also involved in building the ship, including such characters as Susanna Beckford who supplied much of the ship’s ironwork. Forthright and sometimes difficult, she more than held her own in dealing with her male colleagues.

Another was Ambrose Fellows, a 38-year-old experienced shipwright who had two apprentices. He worked on the Lenox, hewing her timbers and helping construct her in record time. His wife and children all lived in the town and on completion of the ship he was appointed her carpenter, for which a warrant was made out and signed by the King and Samuel Pepys.

Fellows stayed with the ship for nearly 20 years and such was his association, his name was first in the paybook, even before that of the captain.

These hard-working folk lived alongside Mrs Bagwell, the pretty daughter-in-law to foreman Owen Bagwell. With the connivance of her family and William, her husband, she seduced Samuel Pepys with sexual favours for the advancement of her family. Their arrangement was still going on during the time Lenox was being built.

Today, the distant successors of these colourful people of Deptford have an opportunity to recreate a small part of their history before the opportunity is lost forever under the tower blocks of modern development. 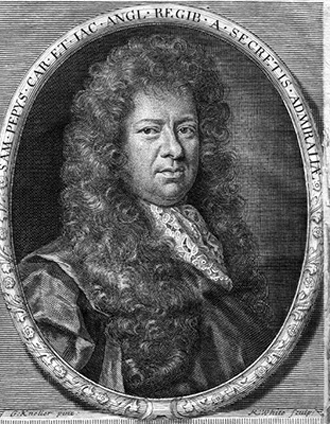