Before Christmas, the Lenox Project joined its sister project Sayes Court Garden in a meeting at City Hall with Sir Edward Lister, Deputy Mayor of London. The meeting was organised by Lenox Project patron Dame Joan Ruddock and attended by the GLA’s planners.

The Lenox team agreed to adopt its second option for the siting of the ship’s construction – in the Olympia Shed – in order to present a joint vision for a cultural ‘Heart and Lungs’ heritage focus at the centre of the site. 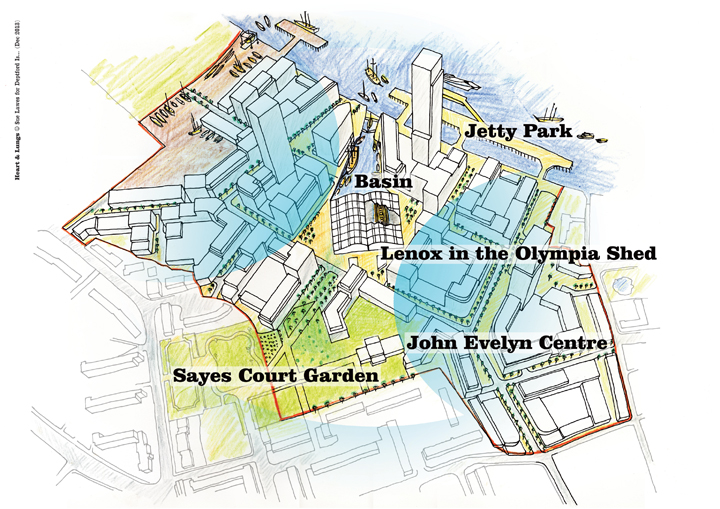 This would require the original Great Basin to be reinstated – a proposal which English Heritage fully supports in principle – to create a functional marine space rather than the small, shallow ‘mirror’ pool proposed by the developer.

The Sayes Court Garden project proposed a stand-alone building to house the archaeological remains of John Evelyn’s Manor House (instead of being incorporated into a large residential block as on the current masterplan) and the extension of the garden space to link the Olympia building with the area of Sayes Court Garden remaining on the western boundary of the site.

The ideas were well received, but since this meeting there has been little progress, and we have now learned, as the new year begins, that the GLA planners are pursuing a contrary course with the developer.

Hutchison Whampoa claims that the slipways under the Olympia Shed are not capable of bearing the load of the Lenox under construction – a claim that has not been substantiated by a structural or geotechnical engineer, independent or otherwise. In addition, HW warns that the reinstatement of the basin poses a ‘high archaeological risk’, which the GLA have questioned but without requesting any independent assessment. Instead they have asked Hutchison Whampoa to report on the likely archaeological risks and issues, and the engineering challenges associated with the use of the Olympia shed and the reinstatement of the basin.

However more worryingly, they have asked the developer to produce a new assessment of how the Lenox could be constructed on the protected wharf – even though we have repeatedly explained that this is simply not an option we are prepared to consider. We have therefore written to the planners to reinforce our case:

“There are many practical issues with this location that we have already gone to great lengths to explain in writing to Hutchison Whampoa and Farrell’s. However we believe the most fundamental barrier to reaching any meaningful conclusion from HW’s ‘re-examination’ of this option, is the fact that we have never been invited to engage in any meaningful discussion with the developer over the detail of the project, nor has HW exhibited any real understanding of its ethos.

Given the applicant’s scant understanding of our plans, we contend that any opinion proffered by HW as to the practicalities or viability of constructing Lenox in any of the named locations would be unreliable, to say the least.

Another issue raised by the proposed use of the protected wharf is that in our recent meeting at City Hall, Sir Edward Lister stated that any decisions around the protected wharf would take “considerably longer than determination of the rest of the site, quite possibly years”.

We have already closely examined the viability of the developer’s proposal for use of the protected wharf, which is time-limited to five years and includes the expectation of the ship’s permanent departure once launched. We provided a detailed report of the difficulties to the developer, and subsequently to yourself.

The profitability and success of the Lenox Project, which includes its ability to provide training, education, jobs, and an appreciation of our heritage for all, depends on it being easily accessible to the public. Other uses for the protected wharf being proposed by the developer, GLA, and PLA would preclude this, even in the most beneficial circumstances.

The ship both under construction and afloat would be the focal point of a centre of excellence which would include specialist workshops, a Deptford-centric maritime museum space, along with conference and catering areas. Lenox will complement local attractions such as the National Maritime Museum and Cutty Sark and being such a natural fit with its World Heritage neighbour would command significant visitor numbers. If the Lenox was built in the Olympia Shed next to a restored Great Basin we believe this would be a realistic prospect.

Worldwide academic support for the project is extensive, but is dependent on the project’s evaluation and exploration of original methods. Most fundamental of these is her construction on a slipway such as the two remaining in the Olympia Shed.

A slipway also guarantees the continuation of training and employment programmes after the launch of Lenox as it enables re-fit or repair of other traditional vessels; again, not an option on the protected wharf for vessels of this size.

Our team is as keen and enthusiastic as ever and anxious to get started. If we have a deal we can start to raise meaningful funds and take on the challenges such a project will bring. However if all that is open to us is the protected wharf, then we feel our skills, time and effort will be better used elsewhere.”

We are also writing to the Mayor of London and his planners to formally state our disappointment at the extent to which two community-led heritage schemes – the Lenox Project and Sayes Court Garden – have been involved in the process, and our concern at the haste with which the decision-making process is being progressed.